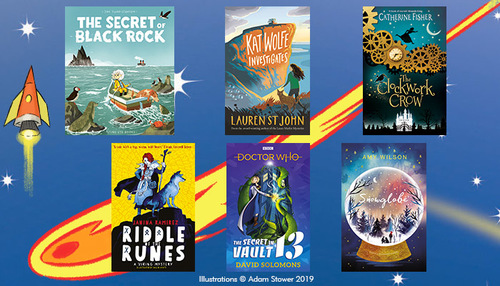 If you’re anything like Cass and Leo Rocket, you’ll love diving in to a mystery story that keeps you guessing from one moment to the next.

Read on to discover books about ancient worlds, secret keepers and mysterious happenings, from the Space Chase collection.

When daydreamer Clementine discovers a mysterious house standing in the middle of town that was never there before, she is pulled towards it by the powerful sense of a mother she never knew. The place is full of snowglobes, swirling with stars and snow and each containing a trapped magician, watched over by Gan, the bitter keeper of the house. One of these is Dylan, a boy who teases her in the real world but who is now desperate for her help.

So Clem ventures into the snowglobes, rescuing Dylan and discovering her own powerful connection to the magic of these thousand worlds. Vowing to release the magicians from the control of their enchantments, Clem unknowingly unleashes a struggle for power that will not only put her family, but the future of magic itself in danger.

Kat Wolfe loves her new home in idyllic Bluebell Bay, especially as it comes with a resident wildcat. But when she starts pet-sitting for pocket money, she finds that beneath the town’s perfect surface lie some dark and dangerous secrets…

After a pet owner vanishes from his clifftop mansion, Kat turns to her new friend, Harper Lamb, for help. What began as mystery-solving holiday fun quickly turns deadly for Wolfe and Lamb. Can they count on their unruly animals to save their lives?

Baroness June Flattery said:
This book was a real rollercoaster. At points, my heart was pounding and I was sitting on the edge of my chair, my brain twisted or I was laughing my head off! At times, I also was so intrigued, I just couldn’t put the book down.

The Secret of Black Rock by Joe Todd-Stanton

Erin loves to lie on the jetty, looking for the weirdest fish in the sea — the weirder, the better! And she knows the best ones must be further out, where her mum won’t let her go…

Out there in the deepest sea lies the Black Rock: a huge, dark and spiky mass that is said to destroy any boats that come near it! Can Erin uncover the truth behind this mysterious legend?

The Secret of Black Rock

The Clockwork Crow by Catherine Fisher

When orphaned Seren Rees is given a mysterious package by a strange and frightened man on her way to her new home, she reluctantly takes it with her.

But what is in the parcel?
Who are the Family who must not be spoken of, and can the Crow help Seren find Tom, before the owner of the parcel finds her?

The Clockwork Crow is a gripping tale of families and belonging set in snowy Wales from a master storyteller.

Coach Orchid Luther said:
It was a really gripping tale of friends and adventure. It’s definitely one to read over and over and had me on the edge of my seat. I would recommend it to anyone who likes a good mystery.

Riddle of the Runes by Janina Ramirez & David Wyatt

The Viking town of Kilsgard has its fair share of mysteries…

Alva rushes through the trees in the dead of night with her sniffer wolf, Fen. Being out alone when there’s a kidnapper on the loose is reckless, but if she ever wants to be an investigator like her Uncle Magnus, she’ll need to be first to the crime scene.

But what Alva discovers raises more questions than it answers, drawing her into a dangerous search for truth, and for treasure.

Riddle of the Runes

Doctor Who: The Secret in Vault 13

Doctor Who: The Secret in Vault 13 by David Solomons

A sinister school where graduation means death…
A monstrous mystery lurking below a quiet London street…
A desperate plea for help delivered by…hang on. A potted plant?

The Doctor has been summoned. The galaxy is in terrible danger, and only a Time Lord can save it. But to do so, she must break in to an ancient vault on a remote and frozen world – from which nobody has ever returned alive…

Can the Doctor and her friends Yaz, Ryan and Graham uncover the shocking secret in Vault 13?

Officer Harmonica Palm-tree said:
I think that this book is adventurous, exciting and gripping. I would highly recommend it to everyone even if they do not like Doctor Who because this book might change their mind!

Have you read any of our recommendations? Write a review and let everyone know what you thought!

What are your favourite edge-of-your-seat, heart-pounding mystery books?
Share your picks with other Space Chasers in Chat