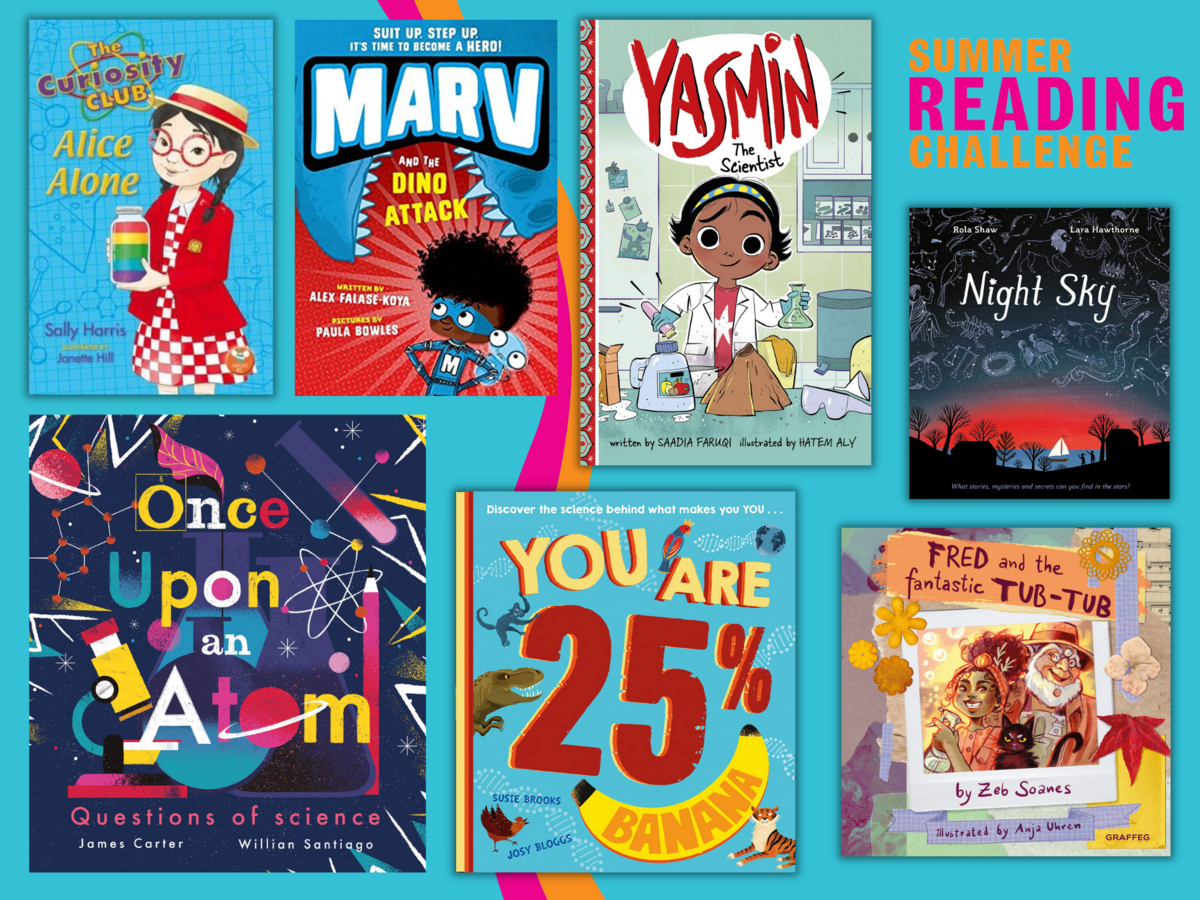 Once Upon an Atom: Questions of Science
James Carter, ill. Willian Santiago

From big bangs to tiny atoms, science tells us why things happen.​
Explore the whys, what’s and how’s of science and answer all the really big questions that curious kids are keen to ask. This playful rhyming book bubbles and bursts with all things scientific, from technology and space to experiments, inventions and the natural world.

Once Upon an Atom: Questions of science

Sonny devotes his weekend to helping his neighbours and fellow Travellers with a variety of tasks. He uses many skills, from calculating the amount of fuel needed for a journey, to restoring a caravan. In fact, the only thing he doesn’t do over the weekend is his homework – his workbook is missing! What will his teacher say?

This new picture book by Richard O’Neill champions the idea that many skills learned at home are as important as those learned at school.

A brilliantly funny first guide to genetics that is perfect for children aged 5 years and over. This will boggle your brain with astonishing facts, as it shows how we’re all related to every living thing on the planet. Did you know that a grain of rice has more genes than you? Or that you’re related to dogs, dung beetles and even daffodils? Luckily, even though you’re 99.9% like a chimpanzee, you’re still 100% you! The extraordinary world of genetics has never been explained so simply.

When Fred’s green-fingered grandfather shows her a map to the mysterious island of Papa Nupi, he leads her on a summer holiday adventure that just might save the planet. From Zeb Soanes, author of the bestselling Gaspard the Fox books. ​

“Beautifully topical, Fred and the Fantastic Tub-Tub is a thrilling and wondrous adventure, where the power of music and nature inspire us all to make the world a better place.” Dame Judi Dench.

Fred and the Fantastic Tub Tub

A wonderful illustrated tour of the night sky. Lara Hawthorne’s beautiful illustrations take the reader on one of the most fascinating journeys that humankind has ever made and one that is common to us all.​

From ancient Egyptians building the pyramids, to early Polynesian sailors criss-crossing the Pacific Ocean, and astronauts travelling into space, the night sky has guided and inspired people across the world, and throughout time.​

Now it’s your turn to look to the skies and discover the mysteries they hide.

Ever wondered about the awesome machines that help humans navigate space? Find out everything there is to know including how rockets blast off, why the International Space Station has a robotic arm, and which space probes have travelled out of the solar system.

Everything is made from something – but the way we make things, from the materials we use to the science and technology involved, is changing fast. Nano offers a fascinating narrative introduction to this cutting-edge area of STEM, better known by the name “nanotechnology”.

With words by Dr Jess Wade – a highly skilled physicist and trailblazing campaigner for diversity in STEM fields – and beautiful, dynamic pictures by award-winning artist Melissa Castrillon, this is the perfect book for budding young scientists and engineers.

Nano: The Spectacular Science of the Very (Very) Small

Everyone seems to have an idea for the science fair except for Yasmin! After some failed experiments, Yasmin’s snack break with Nani inspires an idea. Together they use kitchen science for sweet success. Want to be a scientist? Look around, and everything has science in it! Yasmin learns of a science experiment by accident and is marvelled by it.

It’s an exciting day for Marvin and his classmates because they are visiting the Natural History Museum. Marvin and Joe can’t wait to see all those dinosaur skeletons up close, but they get more than they bargained for when supervillain Leo turns up and brings the Dino skeletons to life!

With the help of his loyal sidekick, a super-intelligent robot called Pixel, it’s time for Marvin to become superhero Marv. Marv must use all of his newfound superhero skills if he wants to stop Leo and save his classmates from the gang of marauding dino skeletons running riot!

Marv and the Attack of the Dinosaurs

The Secret Explorers and the Missing Scientist
SJ King

Meet the Secret Explorers – a band of brainiac kids from all around the world. In this fun, fact-filled children’s book, engineering expert Kiki and Connor the marine biologist are sent on a mission to the Arctic. There they discover a research vessel studying the effects of climate change that has become trapped in the sea ice. It’s up to the Secret Explorers to find the scientist, free the ship, and save the day.

The Secret Explorers and the Missing Scientist

The tiny Tindims are like the Borrowers-on-Sea, who turn our everyday rubbish into treasure. Mother-and-daughter duo, prizewinning Sally Gardner and Lydia Corry, create a fun new world in their empowering new series inspiring conservation and inventive ways to recycle.

Captain Spoons, Mug, Jug, Brew, Skittle and friends are busy recycling when Ethel B Dina is blown out to sea and the Tindims must launch a rescue operation with the help of some friendly fish and surprises along the way.

Printed in dyslexia-friendly font with pictures on every page and perfect for the reluctant reader, the Tindims show keen young ecologists how to help protect our planet for the future.

The Tindims of Rubbish Island

Al’s experiments have the most unexpected and messy consequences. Al is experimenting to find out what kind of covering his time machine will need to survive its SPLASH DOWN! back to Earth. Water experiments have a habit of making things very wet and messy. Can they finish their experiments before mum finds out?

When Alice Chang starts out at her new school, everything isn’t quite as rosy as she’d dreamed. First, she falls out with previous best friend, Gigi, and then she finds that the only after-school club still available is GAS (Girls Achieving at STEM) which Alice considers extremely uncool.

However, with the help of an inspirational teacher and two new best friends, Alice discovers that being cool isn’t always what it looks like in teen magazines and that being yourself and being smart can be the coolest thing of all.

Sounds no human can hear, colours our eyes can’t see, scents no one can smell. . . revealed in the amazing world of Invisible Nature! Discover how animals use these hidden senses and mysterious forces to survive and find out how we have learned to tap into their secret powers in our daily lives.

Invisible Nature: A Secret World Beyond our Senses