This February we are sharing with you some of our favourite books which are either memoirs (a historical account or biography) or books written as letters or diaries.

You can get involved too – you could pick an event which was really important to you and write your own diary entry about what happened or tell a friend or family member in a letter. 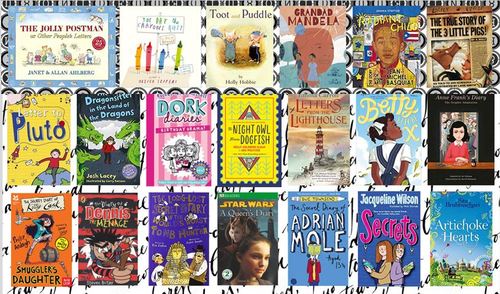 Nelson Mandela’s two great-grandchildren ask their grandmother, Mandela’s youngest daughter, 15 questions about their grandad – the global icon of peace and forgiveness who spent 27 years in prison.

They learn that he was a freedom fighter who put down his weapons for the sake of peace, and who then became the President of South Africa and a Nobel Peace Prize-winner, and realise that they can continue his legacy in the world today.

Seen through a child’s perspective, and authored jointly by Nelson Mandela’s great-grandchildren and daughter, this amazing story is told as never before to celebrate what would have been Nelson’s Mandela 100th birthday

Somewhere in Brooklyn, a little boy dreams of being a famous artist, not knowing that one day he would make himself a king.
Jean-Michel Basquiat and his unique, collage-style paintings rocketed to fame in the 1980s as a cultural phenomenon unlike anything the art world had ever seen. However, before that, he was a little boy who saw art everywhere: in poetry books and museums, in games, in the words that we speak and in the pulsing energy of New York City.

Now, award-winning illustrator Javaka Steptoe’s vivid text and bold artwork echoing Basquiat’s own style introduces young readers to the powerful message that art doesn’t always have to be neat or clean – and definitely not inside the lines – to be beautiful.

Letter to Pluto by Lou Treleaven
Jon’s teacher Mrs Hall wants to keep the art of letter writing alive, much to Jon’s annoyance. He is assigned Straxi as a penpal and they exchange letters telling each about their families, where they live and sending presents, like quills and very smelly vomblefruit!

When the President of Pluto decides to get rid of the smelly Vomblefruit trees in hope that it will encourage tourists to visit Pluto, he ends up causing more damage than he expected. Everything on the planet begins to die and Jon and Straxi are in a race against time to save the planet by sending back the only Vomblefruit left in exisitence – the one in Jon’s garden.

Friday January 2nd. I felt rotten today. It’s my mother’s fault for singing ‘My Way’ at two o’clock in the morning at the top of the stairs. Just my luck to have a mother like her. There is a chance my parents could be alcoholics. Next year I could be in a children’s home.

Letters from the Lighthouse by Emma Carroll

We weren’t supposed to be going to the pictures that night. We weren’t even meant to be outside, not in a blackout, and definitely not when German bombs had been falling on London all month like pennies from a jar.

February, 1941. After months of bombing raids in London, twelve-year-old Olive Bradshaw and her little brother Cliff are evacuated to the Devon coast. The only person with two spare beds is Mr Ephraim, the local lighthouse keeper. But he’s not used to company and he certainly doesn’t want any evacuees.

Desperate to be helpful, Olive becomes his post-girl, carrying secret messages (as she likes to think of the letters) to the villagers. But Olive has a secret of her own. Her older sister Sukie went missing in an air raid, and she’s desperate to discover what happened to her. And then she finds a strange coded note which seems to link Sukie to Devon, and to something dark and impossibly dangerous.

In the summer of 1942, fleeing the horrors of the Nazi occupation, Anne Frank and her family were forced into hiding in the back of an Amsterdam warehouse.

Aged thirteen when she went into the secret annexe, Anne Frank kept a diary in which she confided her innermost thoughts and feelings, movingly revealing how the eight people living under these extraordinary conditions coped with the daily threat of discovery and death.

Adapted by Ari Folman, illustrated by David Polonsky, and authorized by the Anne Frank Foundation in Basel, this is the first graphic edition of the beloved diary of Anne Frank.

Letters from the Lighthouse

We hope that you enjoy these fantastic books – which book would you like to read first?
Leave a review after you read a book to let everyone know what you think!

The Day The Crayons Quit

The Jolly Postman or Other People’s Letters

The True Story of the Three Little Pigs

To Night Owl From Dogfish

The Diary of Dennis the Menace (book 1)

The Dragonsitter in the Land of the Dragons