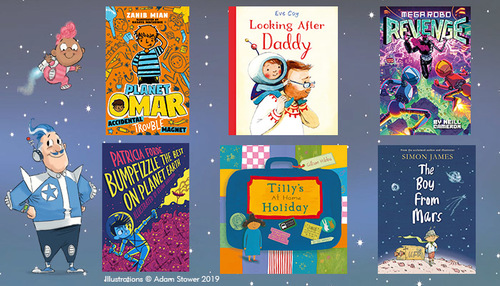 The Rockets love sharing stories together, even when they’re in the middle of a mission!

Here are some of our favourite books about families looking out for each other, having fun and going on all kinds of adventures.

Welcome, readers, to the imaginative brain of Omar! You might not know me yet, but once you open the pages of this book you’ll laugh so hard that snot will come out of your nose (plus you might meet a dragon and a zombie – what more could you want?).

My parents decided it would be a good idea to move house AND move me to a new school at the same time. As if I didn’t have a hard enough time staying out of trouble at home, now I’ve also got to try and make new friends. What’s worse, the class bully seems to think I’m the perfect target.

At least Eid’s around the corner which means a feast (YAY) and presents (DOUBLE YAY). Well, as long as I can stay in Mum and Dad’s good books long enough…

Alex and Freddy are brothers…robot brothers! And they bicker and squabble just like any other siblings. But that’s nothing compared to the fight that lies in store for them.

They discover that they have an older brother they’d never been told about, called Wolfram, who everyone thought had been destroyed. But Wolfram is back, and he’s out for revenge. Revenge against all the humans who tried to obliterate him. And there’s one human in particular who Wolfram has targeted for revenge… Alex and Freddy’s Mum!

Can the Mega Robo Bros stop Wolfram and save humanity?

Tilly’s friends are all going to exciting places for their vacations, but she is staying at home. Mum says they’ll have a great time together, but Tilly thinks it’s impossible to have any vacation fun at home! Or is it?

Looking After Daddy by Eve Coy

Jump inside the imagination of one unforgettable little girl who likes to pretend she’s babysitting her daddy, when really he’s looking after her!

When he grows up he could be an astronaut or a lion tamer or a famous chocolate maker, but his most important job is being her Dad. (And possibly being an astronaut, if she can come too.)

The Boy From Mars by Simon James

The day that Stanley’s mum had to go away to, he decided to go to Mars. In his place, a not-very-well-behaved Martian arrived. He looked just like Stanley, but he wouldn’t eat his vegetables, he wouldn’t clean his teeth and he certainly didn’t play nicely in the playground.

Dad’s not sure what Mum will think when she gets back. Will the martian still be there, or will the real Stanley get back in time?

The Boy from Mars

Bumpfizzle the Best on Planet Earth

Bumpfizzle the Best Planet on Earth by Patricia Forde

Bumpfizzle is an alien, sent to Earth from Planet Plonk on a research mission. Or is he really just a ten-year-old boy who is feeling a bit disgruntled at all the attention his parents are lavishing on The Baby?

Either way, Bumpfizzle’s confusion at Earthling behaviours, as reported in his diary and his frequent reports back to Plonk, are hilarious, and his adventures are ridiculous, from eating the cat’s food (it makes him throw up, always good for attention) to biting his teacher (to check if humans would make a good source of food for Plonkers) and attempting to sacrifice a goat (he soon discovers what goats’ horns are for).

Have you read any of our recommendations? Write a review and let everyone know what you thought!

What are your favourite books about families?
Share your picks with other Space Chasers in Chat