This January we are sharing with you some of our favourite books which are based on myths or legends or include mythical creatures. We have picked a range of books to help you find out more about these interesting stories.

You can get involved – you may want to write your own retelling of a myth or legend or create a comic strip. You may also like to use the Myths and Legends Chatterbooks resources pack. 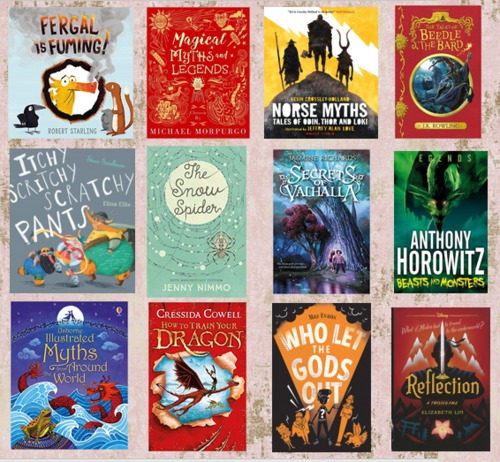 Fergal is fuming by Robert Starling

A dragon with a short temper is not a good combination, as Fergal’s family and friends soon find out. He burns the dinner (literally), reduces the football goal to ashes and absolutely cannot play a nice, quiet board game. It is only when he starts to notice other animals have clever tricks to calm down that Fergal begins to win back his friends, especially when he discovers dragons can cool off in a very handy way.

Illustrated myths from around the world by Usborne

Where did the moon come from? And what happened when giants roamed the land? Find out in this enthralling collection of myths from around the world, including the African folktale, Anansi and the Box of Stories, the Japanese fairytale, The Fox Maiden and the Irish myth, Fionnuala.

Illustrated Myths from Around the World

What if Mulan had to travel to the Underworld? When Captain Shang is mortally wounded in battle, Mulan must travel to the Underworld, Diyu, in order to save him from certain death. But King Yama, the ruler of Diyu, is not willing to give Shang up easily. With the help of Shang’s great lion guardian ShiShi, Mulan must find Shang’s spirit and leave by sunrise, or become King Yama’s prisoner forever. Mulan, still disguised as the soldier Ping, wrestles with the decision whether or not to reveal her true identity to her closest friend. Will Mulan be able to save Shang before its too late?

The Tales of Beadle and the Bard by JK Rowling

The Tales of Beedle the Bard is the first new book from J. K. Rowling since the publication of Harry Potter and the Deathly Hallows. The Tales of Beedle the Bard played a crucial role in assisting Harry, with his friends Ron and Hermione, to finally defeat Lord Voldemort. Fans will be thrilled to have this opportunity to read the tales in full.
There are five tales: The Tale of the Three Brothers, recounted in Deathly Hallows, plus The Fountain of Fair Fortune, The Warlock’s Hairy Heart, The Wizard and the Hopping Pot, and Babbitty Rabbitty and her Cackling Stump. Each has its own magical, mythical character and will bring delight, laughter and the thrill of mortal peril.

Who Let the Gods Out? by Maz Evans

Elliot’s mum is ill and his home is under threat, but a shooting star crashes to earth and changes his life forever. The star is Virgo – a young Zodiac goddess on a mission. But the pair accidentally release Thanatos, a wicked death daemon imprisoned beneath Stonehenge, and must then turn to the old Olympian gods for help. After centuries of cushy retirement on earth, are Zeus and his crew up to the task of saving the world – and solving Elliot’s problems too?

The Tales of Beedle the Bard

Who Let the Gods Out?

We hope that you enjoy reading about these fantastic books – which book would you like to read first? Make sure you leave a review after you read a book to help other children know what you think.

How to Train Your Dragon: Book 1